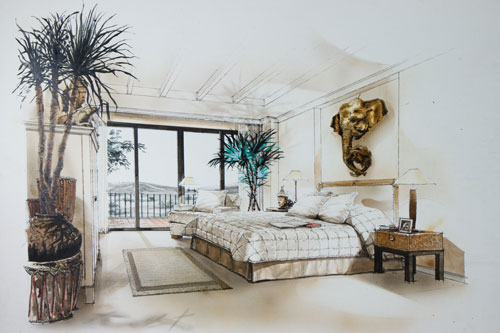 This past spring my wife, Mary Staton, and I showed a condo in Burlington that was listed for sale as having two bedrooms. In preparation for the showing we pulled the original MLS listing when the condo was first sold in 2007, as well as the current active listing, and the public property tax record. All three documents represented this condo as having two bedrooms. So far we have a two-bedroom condo, right?

The showing was going as expected until we went upstairs and saw the second bedroom which was located adjacent to the second full bathroom and bonus room loft area. The first two things we noticed about the room being counted as a bedroom were the skylight in the middle of the ceiling and a double door closet. Was this bedroom really a bedroom? Drawing from my appraisal experience I recalled that a bedroom must have an accessible window or an exterior door for egress access - for safety reasons in case of a fire. This room with a closet and skylight apparently didn’t meet the egress requirement of it being called a bedroom.

Knowing this, Mary Staton and I decided to investigate the matter further since this home was being represented as a two-bedroom condo. Afterall, just because I suspected that this room wasn’t a bedroom doesn't mean it’s not a bedroom, right? Doing what any professional Realtor would do, we contacted the North Carolina Real Estate Commission, the attorney with the North Carolina Association of Realtors (NCAR), The North Carolina Appraisal Board, a local Home Inspector, the City of Burlington Inspections Department, and the City of Burlington Fire Department to get their opinions.

The Appraisal Board said that it was up to the appraiser to determine whether or not they considered it to be a bedroom, but if they did the appraiser should provide detailed comments in their report as to why they were classifying it as a bedroom. In other words, the appraiser could theoretically call it a bedroom, but it would be inadvisable from a professional liability standpoint.

The Burlington Fire Chief referred me to the City of Burlington Inspections Director who said that the second bedroom did not meet egress code which states that upper story windows shall have a total glass area of no less than 5’.7” square feet and be no less than 44” off the floor.

The local home inspector concurred with the City of Burlington Inspections Department that this condo’s second-floor bedroom did not meet egress code, and that they always note in their home inspections that bedrooms without proper egress access are safety concerns. The home inspector said he commonly encounters this situation with rooms in basements, without windows, being used as bedrooms.

After speaking with the attorney with the NCAR, he advised that since this room with the skylight did not meet local egress building code, then it couldn’t be represented as a two-bedroom condo, and that the listing agent of the condo should correct the listing and market the property as a one-bedroom unit or count the loft area as a bedroom.

So, the question is how was the builder, Keystone Homes, able to market and sell this condo as a two-bedroom property in the first place? Mary Staton researched Keystone Homes’ website and found an almost identical floorplan that they were selling where the second-floor loft was an “optional” bedroom. Apparently, when this homeowner bought this condo in question, they decided not to convert the loft to a bedroom. In order for them to make this condo appear as a true functional two-bedroom unit, the owner should sheetrock up the half wall in the loft, install a closet, and put up a bedroom door for privacy.

One last word about bedroom classifications. While many rooms are called and sometimes used as bedrooms, common sense should prevail when in doubt, especially when it comes to functional utility. Contrary to popular belief, a closet is not a requirement for a room to be counted as a bedroom, as long as the room functions appropriately as a bedroom and meets the egress requirement.

To illustrate the point, there’s a home that comes to mind that was being marketed as a four-bedroom property. The second story has a bedroom with its own private and separate bathroom. One of the other two bonus rooms on the second floor was being counted as a bedroom by the listing agent but did not have direct access to a bathroom without having to pass through the bedroom. There is however another full bathroom located on the first floor in the foyer hallway, located adjacent to a first-floor bedroom. If someone were sleeping in the upstairs bedroom (or getting ready at the same time in the morning or evening), the other second-floor bedroom occupant would have to walk downstairs to use the other bathroom. This inconvenience makes this fourth bedroom a functional utility issue, adversely affecting the home’s overall value and marketability. As a result, it would be a stretch to call this additional second-floor bonus room a bedroom. A professional Realtor or Appraiser would not count this as a bedroom and sellers shouldn’t either since most buyers and Realtors will recognize the deficiency and not consider it a true functional bedroom.